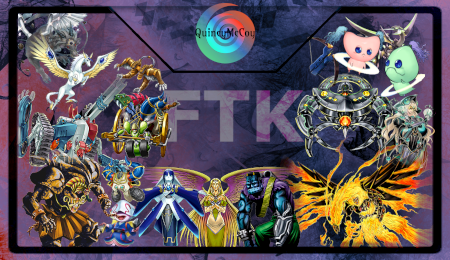 Who wouldn’t want to win on the first turn?

Welcome to a video showcasing 6 ways to OTK with the current cardpool. While some of these may be familiar to you, I tried to highlight a couple of fun and unique combo strings as well! While you can check out my sample decklists at the end of the replay video above, I’ve summarized the base strategy and key initiation to each combo below! Enjoy the degeneracy!

The first build features a very long combo chain, utilizing many FTK offenders, to result in an infinite loop end board. No matter the opponent’s life points, the end state is the opponent controlling a Gellenduo with its effects negated and you controlling a Red-Eyes Flare Metal Dragon. Flare inflicts damage to the opponent, Gellenduo triggers, then Flare inflicts another 500 to repeat the chain. You’ll see a couple of the key cards in this FTK combo in other builds as well, such as Vylon Cube or Armaggedon Knight.

Did anyone say GEMS!? This build is all about using the advantage engine known as the Crystal Beasts to jumpstart Gem-Knight combos. The main line of synergy here is the sheer number of free resources to search, create, then return back to the deck with Saryuja Skull Dread as you dig for your key combo card, Gem-Knight Fusion. While this is the first to abuse Saryuja out of my list, it is one of the more unique builds on the list in that it relies on archetype support to burn for the win: looping the effect of Gem-Knight Lapis Lazuli three times in one turn even if you can only summon her once.

Key Cards to initiate FTK Combo: Gem-Knight Fusion with any way to spam the field with Special Summoned monsters.

Don’t let the archetype fool you – this is not a monster mash burn build. Instead, this deck uses the Samurai both as a combo starter and finisher, relying on other machines to gain more advantage both to the hand and field along the way. The crux of the win condition is using Ultra Polymerization to use a Superheavy Samurai Big Benkei, then reviving him from the GY with 0 DEF. Next, use the GY effect of Superheavy Samurai Soulbreaker Armor 3 times to burn for 3500 dmg each time! You just have to make sure you don’t get them all into the GY at the same time, so discards are mandatory to ensure a full burn FTK. The rest of this build extends your draws and searches until you get the combo cards you need to win!

The only ‘faux-FTK’ on this list, this approach revolves around skipping the opponent’s turn entirely with Arcana Force XXI – The World. To ensure you can, Saryuja is looped a near infinite amount of times with the help of The Agent of Creation – Venus and her Mystical Shine Ball. Time and time again, you shuffle those balls back into the deck with Pot of Avarice, Exodius the Ultimate Forbidden Lord, or Daigusto Emeral, only to summon them right back to the field primed for another major Link Summon. Because all you need is Light Barrier and The World to lock your opponent out of the duel entirely!

The Zefra monsters are known for being a potent Pendulum theme, but were you aware of their ability to search any monster with ease? Just combine Oracle of Zefra, their field spell, with a Synchro Summoned Ravenous Crocodragon Archethys or Stardust Charge Warrior, and you put a monster from your deck on top of your deck only to immediately draw it. This build abuses this interaction to search Cyber Stein, then use that to summon as many copies of Blaze Fenix, the Burning Bombardment Bird as needed to win by ignoring its cost with the help of Telekinetic Charging Cell. Since Cell is an Equip Spell, Vylon Cube makes a reappearance, but this build goes all in on abusing the inherent synergy of the Pendulum mechanic to your advantage by also running the Supreme King and Magician engines!

What’s an FTK video without getting all 5 pieces of Exodia for game? This build combines the Endymion Pendulum monsters with Exodia support, abusing Magical Abductor to search pieces, Union Carrier to search pieces in tandem with Obliterate! and Magicians’ Souls, and the good old draw power of the Spellbook engine! Don’t forget the power of Where Arf Thou? It’s certainly a classic with the twist of new support. This also serves as a great segue into my next profile on the Spell Counter strategy!

Key Cards to initiate FTK Combo: Be lucky with your draws into your search power.

Note: This is continuing the style of Creative Deck Profile articles, designed to showcase a build through replays and an attached summary. If you wish to see a CDP for an archetype, theme, or strategy you love, feel free to private message me on the YGOrg Discord server, the comments section of any of my YouTube videos, or just post a comment in response to this article on our Facebook page with your ideas to keep under consideration! On most YGO-related communities my username is Quincymccoy, so feel free to reach out. As of now, I have 4 outstanding requests that I am considering: Amazement, Sunavalon, Symphonic Warrior, and Infernity. Some of my prior requests was covered by participants in CDSS5, which recently completed on my Channel, so I highly suggest checking that out and subscribing for all of my profiles on YouTube!