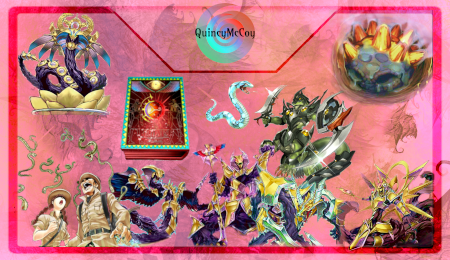 A new Reptile archetype is here to Rain supreme; I mean Reign supreme…

Introducing the Abhyss theme from the upcoming Ancient Guardians set, a chaotic bunch of LIGHT and DARK Reptiles. These new snakes center on reincarnation from the GY, offering a variety of ways to summon their litany of bosses by offering monsters on your field as tribute. For example, Curse, Dawn of the Abhyss (YGOrg Translation) can tribute 1 monster you control to summon itself, lets your opponent summon a monster from the GY (only if they have one), then you trigger its second effect to summon a Level 4 Abhyss from the GY. The King and Queen of the Abhyss, two dual mid-level bosses, center on disruption, sending from your opponents field or hand while also generating advantage for you, especially if both of them are on the field together. As hinted in the title, the direction I took with my initial stab of the theme was to employ W Nebula Meteorite, the old Worm support trap, since it can summon ANY Lv7+ LIGHT Reptile during the End Phase, such as Aron, King of the Abhyss (YGOrg Translation) or Ogdoabyss, Diety of the Abhyss (YGOrg Translation), the theme’s highest-leveled boss monster! Finally, with reliance on facedown monsters for Meteorite, what better support card is there than Book of Eclipse to disrupt combo decks and stop them in their tracks. Embrace snakes with this new archetype that will debut soon!

Note: As many of these cards were recently revealed, most of the names used below are YGOrg translations of the OCG text. As these cards are also yet to be released even in the OCG or backed by official rulings, card interactions as they currently stand cannot be fully guaranteed. As always, I’ve provided links to the Yugipedia pages for all of the non-TCG cards in the decklist. Feel free to use those links to fully explore the new Abyss Support or check out their Yugipedia page here: Abhyss – Yugipedia – Yu-Gi-Oh! wiki

Note: This is continuing the style of Creative Deck Profile articles, designed to showcase a build through replays and an attached summary. If you wish to see a CDP for an archetype, theme, or strategy you love, feel free to private message me on the YGOrg Discord server, the comments section of any of my YouTube videos, or just post a comment in response to this article on our Facebook page with your ideas to keep under consideration! On most YGO-related communities my username is Quincymccoy, so feel free to reach out. As of now, I have 4 outstanding requests that I am considering: Springans, Amazement, Utopia, and Spaceships. Some of my prior requests was covered by participants in CDSS5, which recently completed on my Channel, so I highly suggest checking that out and subscribing for all of my profiles on YouTube! 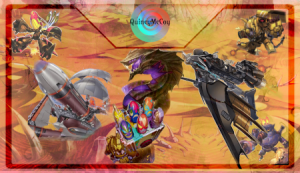