“Legacy of the Valiant” finally comes out November 16th, full  of a ton of incredibly powerful Xyz Monsters! 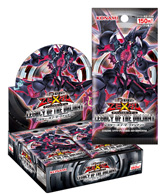 There are so many Xyz Monsters included that they’ll require two introductions! This time around, we’ll introduce 6 Xyz Monsters that first appeared in the animated series!

Number C101: Silent Honors Dark Knight
(WATER Aqua-Type ATK 2800/DEF 1500)
Its effect that once per turn allows it to make a Special Summoned monster your opponent controls its Xyz Material is quite terrifying! And this once per turn effect doesn’t even need Xyz Material to use this effect! And while “Number 101: Silent Honors Ark Knight” (Number 101) is in your Graveyard, when it’s sent to the Graveyard with Xyz Material, it can Special Summon itself back from the Graveyard, and afterwards, you gain Life Points equal to its original ATK! (It can be brought out with 3 Level 5 monsters…) Ranking it up from Number 101 is really powerful!

Number 39: Utopia Roots
(LIGHT Warrior-Type ATK 500/DEF 100)
Xyz Summon it with 2 Level 1 monsters OR “Rank-Down-Magic Numeron Fall”! When you or your opponent’s monster declare an attack, you can use 1 Xyz Material to negate that attack, and if it was an Xyz Monster, this card gains 500 ATK for each Rank that monster has! Because it retains that ATK after the turn you activate this effect, if you negate the attack of a Rank 8 monster twice, this card will have 8500 ATK, allowing it to decide the Duel in a split-second!

Number C69: Heraldry Chaos Crest
(LIGHT Psychic-Type ATK 4000/DEF 1800)
When your opponent’s monster declares an attack, you can destroy all cards your opponent controls. Also, if this card has “Number 69: Heraldry Crest” attached, once per turn, you can use 1 Xyz Material to target an opponent’s Xyz Monster! If you do, this card gains ATK equal to that monster’s original ATK, gains its name, and that monster’s original effect!

Number C92: Heart-eartH Chaos Dragon
(DARK Dragon-Type ATK 1000/DEF 0)
This card can’t be destroyed by battle! When your monsters inflict battle damage to your opponent, you gain Life Points equal to that damage! And if this card has “Number 92: Heart-eartH Dragon” attached to it as Xyz Material, you can activate this card’s power effect. By using 1 Xyz Material, you can negate the effects of all face-up cards your opponent currently controls until the End Phase of the turn you activate this effect! And furthermore, this effect and its activation can’t be negated! Aim to Rank-Up “Number 92”!

Gorgonic Guardian
(DARK Rock-Type ATK 1600/DEF 1200)
Xyz Summon it with 2 Level 3 Rock-Type monster! Once per turn, by using one of its Xyz Materials, you can make the ATK of a face-up monster your opponent controls a grand sum of 0, and that monster’s effects are also negated! And, this effect CAN be used during the opponent’s turn! Also, once per turn, it has an effect that can, once per turn, destroy a monster with 0 ATK. So aim to use these two effects for a killer combo! Also, if you use it in a “Chronomaly” Deck, its combo potential with “Number 33: Chronomaly Machu Mech” is incredible!

There are even more Xyz Monsters included in “Legacy of the Valiant”!
Stay tuned for next time…