Predictably, its a fair bit of textwall that lets Ra do things it did in the anime. 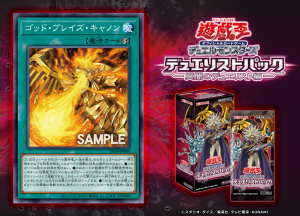 God Blaze Cannon / Blaze Cannon
Quick-Play Spell
(1) Choose 1 “The Winged Dragon of Ra” you control, and it gains these effects until the end of this turn. This card’s activation and effect cannot be negated.
● Unaffected by your opponent’s card effects.
● When an attack is declared involving this card: You can Tribute any number of other monsters that did not declare an attack this turn; this card gains ATK equal to the Tributed monsters’ combined original ATK, until the end of this turn.
● After damage calculation, if this card attacked: You can send all monsters your opponent controls to the GY.

Do note that this card is a “Blaze Accelerator” card, due to “Blaze Cannon” being that archetype’s OCG name.