Yuya’s father and the master of Performage face off, and one of the Trap Cards is revealed. 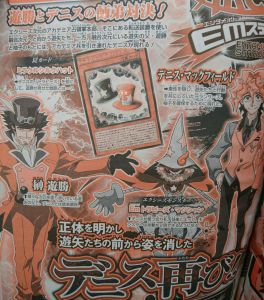 Dennis and Yusho are confirmed to have been Student and Teacher.

Miracle Silk Hat (Similar to Magical Silk Hat, i.e. Magical Hats)
Normal Trap Card
(1) When your opponent’s monster declares an attack: Take 2 cards from your hand (1 monster card and 1 Spell/Trap Card), and without revealing them, Special Summon them in face-down Attack Position. (Spellcaster-Type/LIGHT/Level 1/ATK 0/DEF 0) During this turn, your opponent can only attack with 1 monster. The monsters Special Summoned by this effect can only exist during the Battle Phase, and are destroyed at the end of the Battle Phase. Also, when that card(s) is attacked, during damage calculations, reveal it and apply 1 of the following effects.
• If it was the monster: The battle damage inflicted during this battle is doubled.
• If it was the Spell/Trap Card: Neither player takes damage from this battle.

Note, the above card is not confirmed for release in any upcoming product, merely that Yusho (its owner) uses it against Dennis’ Trapeze Magician.