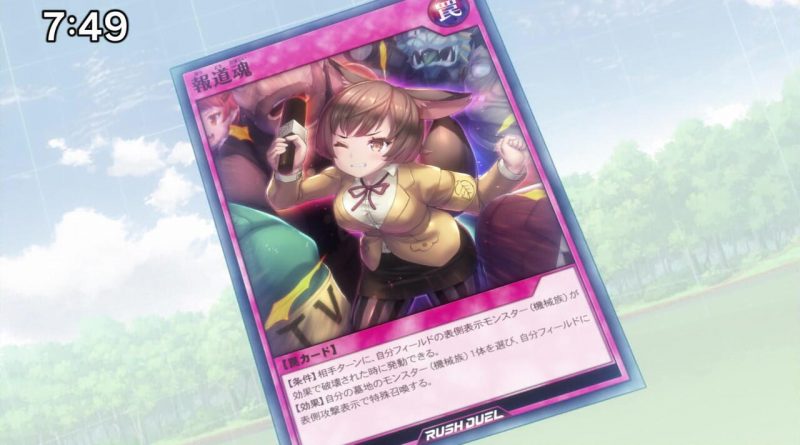 So much Newspaper meme-ing.

If certain Japanese sources continue to be useful and SEVENS continues to do this on a weekly basis with fairly clear cards, I’ll post these regularly.

Note: These are not currently confirmed for physical release in the Yu-Gi-Oh! Rush Duel Card Game. 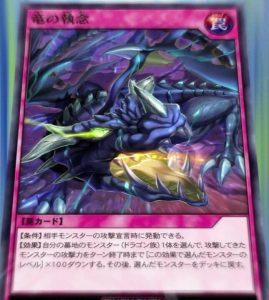 竜の執念 Ryuu no Shuunen (Dragonic Tenacity)
Normal Trap Card
Requirement: Activate when an opponent’s monster declares an attack.
Effect: Choose 1 monster (Dragon-Type) in your Graveyard, the attacking monster loses 100 ATK [times the Level of the monster chosen by this effect] until the turn ends. Then, return the chosen monster to the Deck. 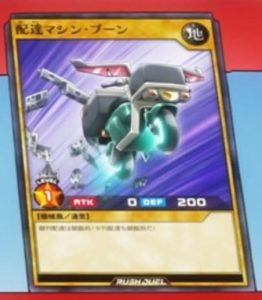 Note: This card’s name ブーン is a sound effect in Japanese that means Whirr, Whoosh, etc. 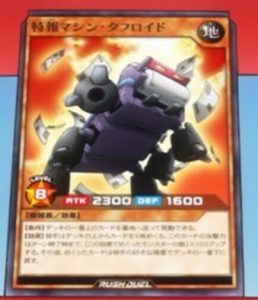 特報マシン・タフロイド Tokuhou Machine Toughroid (News Flash Machine Toughroid)
Level 8 EARTH Machine Effect Monster
ATK 2300
DEF 1600
Requirement: Activate by sending the top card of the Deck to the Graveyard.
Effect: Excavate the top 5 cards of your opponent’s Deck. This card gains 100 ATK [times the number of excavated monsters] until the end of the turn. Then your opponent places the excavated cards on the bottom of the Deck in the order they desire.

Note: タフロイド is one character off from タブロイド, i.e. Tabloid, a newspaper publication of incredibly dubious authenticity 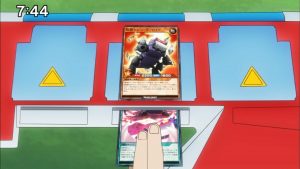 シンブンシン Shinbunshin (Duplicate Newspaper)
Normal Spell Card
Requirement: None
Effect: Special Summon 1 monster from your Graveyard to your field face-up that has the same card name as a monster (Machine-Type) on your field. The monster Special Summoned by this effect cannot attack directly and its effect is negated.

Note: シンブンシン Is a Portmanteau of シンブン (Newspaper) and ブンシン (Duplicate/Clone/Alter Ego/Other Self/Representation of Oneself in Something Else). 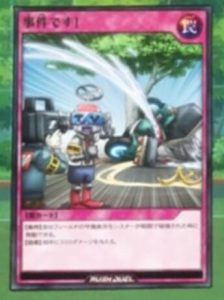 事件です！Jiken Desu! (An Accident Has Occurred!/Live On The Scene!)
Normal Trap Card
Requirement: Activate when a Defense Position monster on your field is destroyed by battle.
Effect: Inflict 300 damage to the opponent.

Note: This card might be referencing an old 1980s TV Show called 事件ですよ! or it might just be a generalized stock phrase in Japanese News Reporting, similar to “Live on the Scene” in US News Reporting. 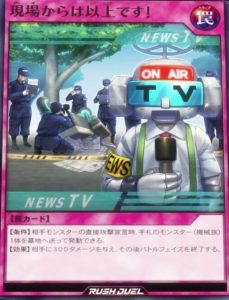 現場からは以上です！Genba kara ha Ijo desu! (And Now Back To You!)
Normal Trap Card
Requirement: When an opponent’s monster declares an attack, you can activate by sending 1 monster (Machine-Type) from the hand to the Graveyard.
Effect: Inflict 300 damage, then end the Battle Phase.

Note: 現場からは以上です！ literally means “And that’s all from the scene (of the accident)”. The most common stock phrase I can think of similar to this is “And now back to you!”, where a reporter passes the baton back to the news station anchors and staff. 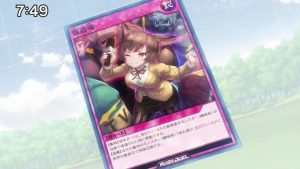 Note: This might be a reference to 報道の魂, an off-on late night news and documentary program on TBS, a Japanese TV station.