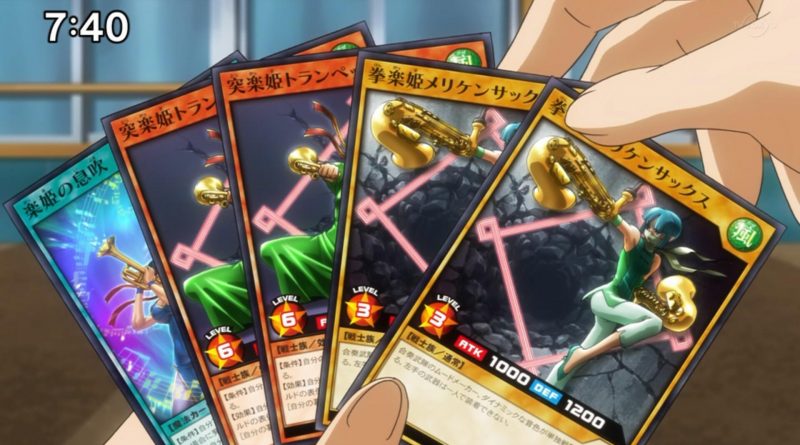 Puns are the worst.

Not confirmed for release, etc. 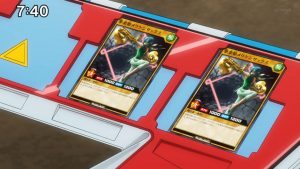 Note: This card’s name references two things:
• Kengakki sounds like “Keyboard Instrument”.
• Merikensack is Japanese slang terminology for a “Brass Knuckle” and obviously, a sax is added to the end. 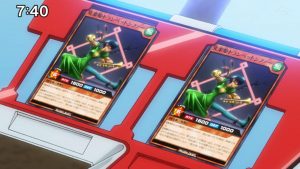 突楽姫トランペットンファー Totsugakki Trumpetonfa (Trumpetonfa the Stabbing Music Maiden)
Level 6 WIND Warrior-Type Effect Monster
ATK 1600
DEF 1000
[Requirement] You can activate if there is a Normal Monster (Warrior-Type) in your Graveyard.
[Effect] Send the top card of your Deck to the Graveyard. Then, choose 1 face-up monster you control, until the end of the turn, it gains 100 ATK x [The number of Normal Monsters (Warrior-Type) in your Graveyard].

Note:
• Not sure on instrument type.
• Tonfa is well, a hand weapon like a club, commonly used in Asian martial arts, and has Trumpet added in. 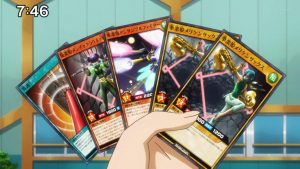 旋楽姫ヌンチャクラリネット Sengakki Menchaclarinet (Nunchuclarinet the Whirling Music Maiden)
Level 5 WIND Warrior Effect Monster
ATK 1600
DEF (Unknown)
[Requirement] If your opponent controls a face-up monster (Level 7 or higher), you can send the top card of your Deck to the Graveyard.
[Effect] If the card you sent to the Graveyard for this effect’s requirement was a monster (WIND/Warrior-Type), choose 1 face-up monster your opponent controls, until the end of the turn, it loses 500 ATK x [The number of face-up monsters you control (WIND/Warrior-Type)].
(Full Text Cannot Be Confirmed)

Note:
• Unsure as well as to instrument type this might be playing on.
•  Nunchucks are also classic martial arts weapons, and well, mixed with a clarinet. 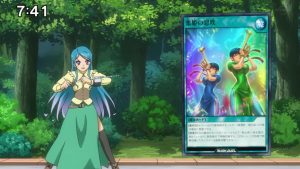 楽姫の息吹 Gakki no Ibuki (Breath of the Music Maidens)
Normal Spell Card
[Requirement] You can activate if you control 2 face-up monsters (WIND/Warrior-Type)
[Effect] Choose 1 monster (Level 6 or lower/Warrior-Type) in your Graveyard, Special Summon it to your field face-up. For the rest of this turn, the monster Special Summoned by this effect cannot attack directly.