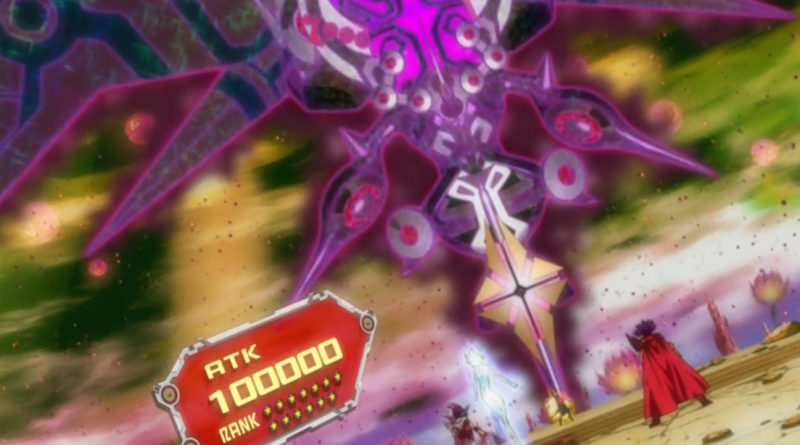 From the “Pieces of Memories” Number collection 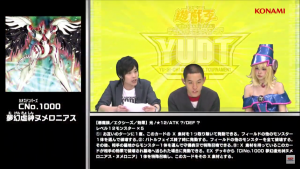 ＣＮｏ．１０００ 夢幻虚神ヌメロニアス Chaos Numbers 1000 Mugenkyojin Numerronius (Number C1000: Numerronius)
Rank 12 LIGHT Fiend Xyz Effect Monster
ATK ?
DEF ?
Xyz Materials: 5 Level 12 monsters
(1) Once per turn (Quick Effect): You can detach 1 material from this card; destroy 1 other monster on the field.
(2) At the end of the Battle Phase: Destroy all other monsters on the field, then you can Special Summon 1 monster from your opponent’s GY in Defense Position.
(3) If this card in your Monster Zone is destroyed by your opponent’s card effect while it has material, and is sent to your GY: You can Special Summon 1 “Number iC1000: Numerronius Numerronia” from your Extra Deck, and if you do, attach this card to it as material. 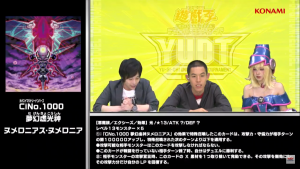 ＣｉＮｏ．１０００ 夢幻虚光神ヌメロニアス・ヌメロニア Chaos Imaginary Numbers 1000: Mugenkyokoshin Numerronius Numerronia (Number iC1000: Numerronius Numerronia)
Rank 13 LIGHT Fiend Xyz Effect Monster
ATK ?
DEF ?
Xyz Materials: 5 Level 13 monsters
(1) If this card was Special Summoned by the effect of “Number C1000: Numerronius”, it gains 100,000 ATK/DEF during your opponent’s turn only, also begin applying the following effects when the next turn begins after this card was Special Summoned.
• Each monster your opponent controls must attack this card, if able.
• When your opponent’s turn ends, if this card has not battled that turn, you win the Duel.
(2) When an opponent’s monster attacks: You can detach 1 material from this card; negate that attack, and if you do, gain LP equal to that monster’s ATK.

ヌメロン・カオス・リチューアル Numeron Chaos Ritual
Normal Spell Card
(1) During the turn a face-up “Number C1: Numeron Chaos Gate Sunya” you control was destroyed by a monster effect: You can target 1 “Numeron Network” and 4 “Number” Xyz Monsters in your possession that are banished or in the GY; Special Summon 1 “Number C1000: Numeronius” from your Extra Deck (but its ATK becomes 10000 and its DEF becomes 1000), then attach those 5 targets to it as material. For the rest of the turn, you can only Normal or Special Summon a monster(s) once.
Source: The United Duel Tournament Stream