The Starter Deck for 2017 has been announced. 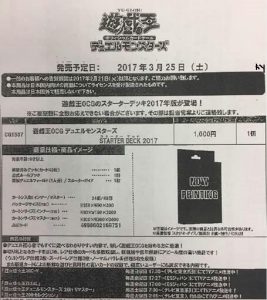 Of note, the product is not using the moniker of a new series, but instead lists itself as being “Yu-Gi-Oh! Official Card Game Duel Monsters”, a label that it used back during the times of the original series and GX, as well as legacy products related to them.

This may or may not mean anything of importance.