And we have finalized and legible text! 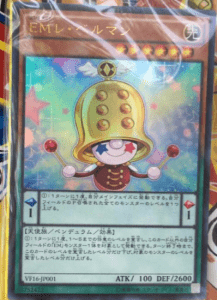 VF16-JP001 EMレ・ベルマン Performapal Le Bellman
Level 6 LIGHT Fairy-Type Pendulum Effect Monster
ATK 100
DEF 2600
Pendulum Scale 1:
Pendulum Effect:
(1) Once per turn during your Main Phase: You can increase the Level of all Pendulum Summoned monsters you control by 1.
Monster Effect:
(1) Once per turn: You can declare a Level between 1 and 5, then target 1 “Performapal” monster you control, except this card; until the end of the turn, this card’s Level is decreased by the declared amount, while the Target monster’s Level increases by the declared amount.