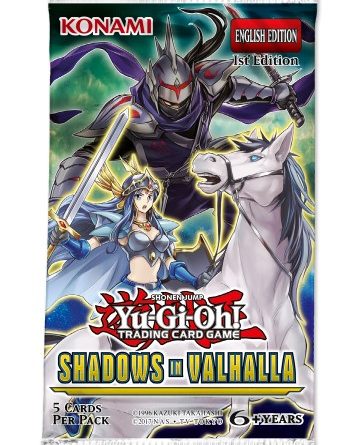 Mostly a reiteration of information we know, but with slightly more details and clarification.

Light meets dark, heroism meets villainy, and the past returns to challenge the future this August! Konami Digital Entertainment, B.V. (KONAMI) is proud to present three new releases in the Yu-Gi-Oh! TRADING CARD GAME (TCG), each offering new opportunities for Duelists to up their game.
First, Structure Deck: Powercode Link escalates Link Summoning techniques with more than a dozen new cards, while making Link Summons even easier for lots of different strategies. The Shadows in Valhalla booster combines popular, previously released cards and incredible new cards for the “Ninja”, “Entity”, and “Invoked” themes, and marks the debut of Zigfried von Schroeder’s Valkyries! And finally, the 2018 Mega-Tins reissue the most sought-after cards in Dueling today, while lending new power to two of Dueling history’s most iconic heroes: Yu-Gi-Oh! GX’s Jaden Yuki and Yu-Gi-Oh! 5D’s Yusei Fudo! 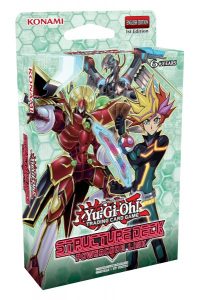 Grow your network! Duelists who started their journey with July’s Starter Deck: Codebreaker can upgrade with Structure Deck: Powercode Link, a collection of monsters, spells, and traps that help you Link Summon again and again. Tournament players will find powerful, fan-favorite cards like Phantom Skyblaster, Blazing Mirror Force, and Effect Veiler, and Powercode Link delivers more than a dozen new cards never seen before in the TCG. 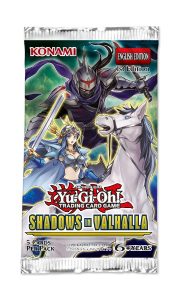 Get ready to bend the forces of time and space! The Shadows in Valhalla booster set unlocks new powers for some of today’s most compelling characters…and summons forth old heroes and shadowy forces from Dueling’s past. Zigfried von Schroeder’s signature “Valkyrie” cards make their long-awaited debut! Each Valkyrie has all the abilities you’d expect from the original animated series, but also features amped-up powers to keep them competitive in today’s tournaments. Combine them with the new Mischief of the Time Goddess to STEAL YOUR OPPONENT’S TURN and ascend to victory!

The Valkyries aren’t the only forces emerging from the woodwork – Ninjas are back! Shadows in Valhalla includes some of the best Ninja cards from Dueling’s history, plus new “Ninja” monsters and cutting-edge support cards.  Combined with new cards for the “Elder Entity” and “Old Entity” themes, Shadows in Valhalla lets you delve into the deepest secrets of Dueling’s arcane powers.

Shadows in Valhalla launches on August 16, a 60-card all-foil set with 20 Secret Rares and 40 Super Rares. 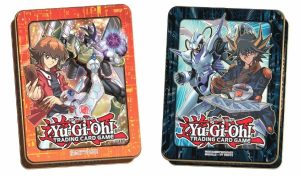 And finally, we end the month with one of the most celebrated releases of the year: the 2018 Mega-Tins. Each Tin includes three Mega-Packs with cards from Maximum Crisis, Code of the Duelist, Circuit Break, and Extreme Force, giving you another chance at powerful tournament cards like Borreload Dragon, Saryuja Skull Dread, and Evenly Matched, all offered in their original rarities. And just like previous Mega-Tins, this year’s collections are packed with foil variant cards too.

But the 2018 Mega-Tins have a new surprise: each of the two Mega-Tins comes with one unique card for the featured Duelist. Jaden Yuki’s Mega-Tin contains Elemental HERO Nebula Neos, a new Contact Fusion that commands powerful draw, negation, and banishing abilities! Not to be outdone, Yusei Fudo’s new Junk Speeder is a never-before-seen Synchro Monster that revs up aggression by doubling its ATK, and gasses up your field with Tuner Monsters!