And it’s one of the Numbers that was mysteriously spirited away from Light’s Revenge. Possibly the biggest, baddest and strongest of the 5 included.

For YCS Rimini, the following prizes are being handed out:

In addition to claiming the title of YCS winner, the weekend’s champion will take home a prize package that includes a PlayStation 4 Pro, exclusive YCS Prize Card and paid travel and accommodation to the 2018 WCQ: European Championship. Duelists that finish high in the overall standings will also earn themselves some highly sought-after prizes.

Meanwhile, the identity of the new Prize Card is that of “Number 89: Diablosis the Mind Hacker” 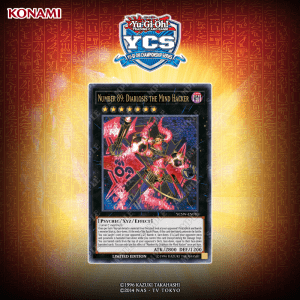 YCSW-EN010 Number 89: Diablosis the Mind Hacker
Rank 7 DARK Psychic-Type Xyz Effect Monster
ATK 2800
DEF 1200
Materials: 2 Level 7 monsters
Once per turn: You can detach 1 material from this card; look at your opponent’s Extra Deck and banish 1 monster from it, face-down. At the end of the Battle Phase, if this card destroy a monster by battle: You can target 1 card in your opponent’s GY; banish it, face-down. If a card your opponent owns and possesses is banished face-down while you control this card (except during the Damage Step): You can banish cards from the top of your opponent’s Deck, face-down, equal to their face-down banished cards. You can only use this effect of “Number 89: Diablosis the Mind Hacker”. 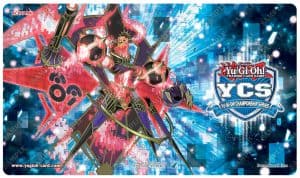 Also a Diablosis mat will be handed out.