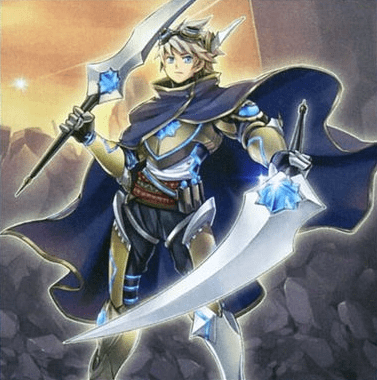 Some times I have to wonder what goes through the localizers’ heads. Do they just not like storylines or card lore?

These are transcriptions of copies floating around early.

For what it’s worth, the Japanese card’s Flavor Text was:

Which basically translates to:

The hero who defends the light of the stars
Must destroy the darkness of the illusory world
And entrust his power to the chosen one.
The will inherited by the chalice of the stars will become a new key
And become the sword that cuts down darkness.

EXFO-ENSE2 Called by the Grave
Quick-Play Spell Card
Target 1 monster in your opponent’s GY; banish it, and if you do, until the end of the next turn, its effects are negated, as well as the activated effects and effects on the field of monsters with the same original name.

EXFO-ENSE3 Galaxy-Eyes Cipher Blade Dragon
Level 9 LIGHT Dragon Xyz Effect Monster
ATK 3200
DEF 2800
Materials: 3 Level 9 monsters
You can also Xyz Summon this card by using a Rank 8 “Galaxy-Eyes” Xyz Monster you control as material. (Transfer its materials to this card.) Cannot be used as material for an Xyz Summon. Once per turn: You can detach 1 material from this card, then target 1 card on the field; destroy it. If this Xyz Summoned card you control, is destroyed by battle with an opponent’s attacking monster, or destroyed by an opponent’s card effect, and sent to your GY: You can target 1 “Galaxy-Eyes Cipher Dragon” in your GY; Special Summon it.

EXFO-ENSE3 PSY-Framegear Gamma
Level 2 LIGHT Psychic Tuner Effect Monster
ATK 1000
DEF 0
Cannot be Normal Summoned/Set. Must be Special Summoned by a card effect. When your opponent activates a monster effect while you control no monster (Quick Effect): You can Special Summon both this card from your hand and 1 “PSY-Frame Driver” from your hand, Deck, or GY, and if you do, negate that activation, and if you do that; destroy that monster. During the End Phase, banish the face-up monsters Special Summoned by this effect.