Dimension of Chaos (which goes on sale July 18th, 2015), includes the flip monster “Pot of The Forbidden” which has a powerful Trigger Effect! That effect allows you to choose from and activate one of four different effects, all of which are obscenely powerful! 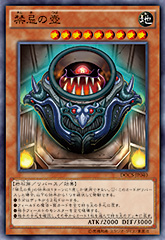 Pot of The Forbidden
[Rock-Type ATK 2000/DEF 3000]
You can only use the effect of “Pot of The Forbidden” once per turn. (1) If this card is flipped face-up: You can activate 1 of the following effects.
● Draw 2 cards.
● Return all Spell/Trap Cards on the field to the hand.
● Destroy all monsters your opponent controls.
● Look at your opponent’s hand, and shuffle 1 card there into the Deck.

* It has various effects you can activate depending on the state of the Duel.
⇒ It has four obscenely powerful effects!!!!

What kind of cards will you use this card with?
This card has powerful effects that can easily be used for combos and Decks, so think of as many ways to use this card as possible!

Dimension of Chaos (On Sale July 18th, 2015)
Shocking new cards appear, such as Yuya’s “Performapals” and “Odd-Eyes”! It also includes many cards from his rivals, including “D/D” and “Superheavy Samurai” cards! And, at least one card from the King of Riding Duels, Jack, will appear!? Also, keep a look out for the new Series “Majespecter”! Not only can they pull off a flashy Pendulum Summon, but they have effects that activate when they’re Normal or Special Summoned, allowing you to set up for the next Combo, making them a powerful series that leads into each other! [ To the Product Page ]