So I heard you liked Dragons. 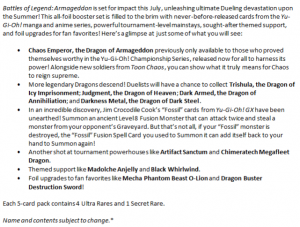 Battles of Legend: Armageddon is set for impact this July, unleashing ultimate Dueling devastation upon the Summer! This all-foil booster set is filled to the brim with never-before-release cards from the Yu-Gi-Oh! manga and anime series, powerful tournament-level mainstays, sought-after themed support and foil upgrades for fan favorites! Here’s a glimpse at just some of what you will see:

• Chaos Emperor, the Dragon of Armageddon previously only available to those who proved themselves worthy in the Yu-Gi-Oh! Championship Series, released now for all to harness its power! Alongside new soldiers from Toon Chaos, you can show what it truly means for Chaos to reign supreme.
• More legendary Dragons descend! Duelists will have a chance to collect Trishula, the Dragon of Icy Imprisonment; Judgment, the Dragon of Heaven; Dark Armed, the Dragon Annihilation; and Darkness Metal, the Dragon of Dark Steel.
• In an incredible discovery, Jim Crocodile Cook’s “Fossil” cards from Yu-Gi-Oh! GX have been unearthed! Summon an ancient Level 8 Fusion Monster that can attack twice and steal a monster from your opponent’s Graveyard. But that’s not all, if your “Fossil” monster is destroyed, the “Fossil” Fusion Spell you used to Summoned it can add itself back to your hand to Summon again!
• Another shot at tournament powerhouses like Artifact Sanctum and Chimeratech Megafleet Dragon.
• Themed support like Madolche Anjelly and Black Whirlwind.
• Foil upgrades to fan favorites like Mecha Phantom Beast O-Lion and Dragon Buster Destruction Sword.

Name and contents are subject to change. *