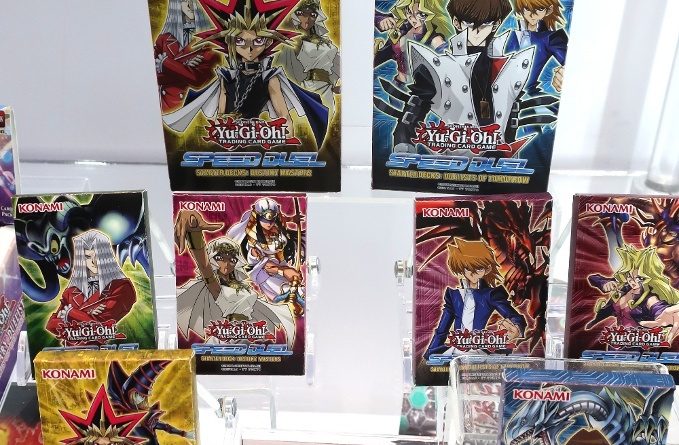 Chiefly pictures of the key monsters of each Deck! 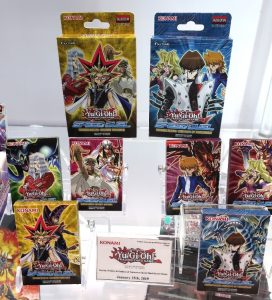 The Speed Dueling format ties closely to Konami’s successful Yu-Gi-Oh! Duel Links video game, and is designed as an onramp for new TCG players. “[Speed Dueling] is very similar to how the mobile game Yu-Gi-Oh! Duel Links plays, Hoashi told us. “Each person has 4,000 life points. You only have three monster zones, and it’s a 20-plus card deck. It’s a simpler way to play; it should be great for entry-level players.”
“Each Speed Dueling card, although it’s the same Yu‑Gi‑Oh! card, will have a logo,” she explained. “It’s like a watermark of the Speed Dueling logo on the card itself. For Speed Duel, you can only use the cards that are geared towards the speed duel. You can also use your Speed Duel cards in your current TCG deck, if you want.”

Konami will support the Speed Dueling format with both boosters and organized play. Additional products are planned through 2019. “The card count per pack will be more similar to our Star pack, which had three cards per pack,” Hoashi said. “It’ll contain cards that’ll help the Starter Decks that have already been released.”

“We’re looking at our first booster pack to come out in March,” she continued. “Then over the course of the year, we’ll be releasing more booster packs, and also more starter decks as well that’ll introduce more character decks. We’ll also support it with organized play at the OTS (Official Tournament Store) level, as well as at the premier event level.”