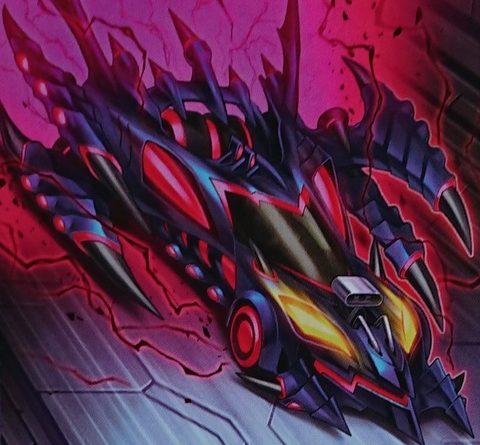 The Master Duel car mate has come a long way. 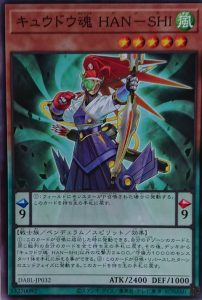 DABL-JP032 キュウドウ魂 HAN-SHI Kyuudou Spirit HAN-SHI (Han-Shi Kyudo Spirit)
Levl 5 WIND Warrior Pendulum Spirit Effect Monster
ATK 2400
DEF 1000
Pendulum Scale: 9
Pendulum Effect:
(1) If a monster(s) is Pendulum Summoned: Return this card to the hand.
Monster Effect:
(1) When this card is Normal Summoned: You can return as many of your cards in the same columns as your cards in the Pendulum Zone as possible to the hand, then you can add 1 monster with 2400 ATK/1000 DEF from your Deck to your hand, except “Han-Shi Kyudo Spirit”.
(2) Once per turn, during the End Phase, if this card was Normal Summoned or flipped face-up this turn: Return it to the hand.

Note: Kyudo is the martial art of archery. 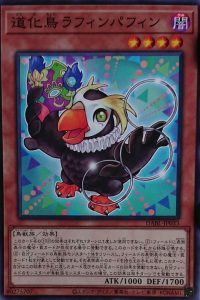 DABL-JP033 道化鳥ラフィンパフィンDoukechou Laughing Puffin (Laughing Puffin the Jester Bird)
Level 4 DARK Winged Beast Effect Monster
ATK 1000
DEF 1700
You can only use the 1st and 2nd effect of this card’s name each once per turn.
(1) If there is face-up Spell/Trap on the field: You can Special Summon this card from your hand.
(2) You can Tribute 1 Winged Beast monster, then target 1 face-up Spell/Trap on the field; return it to the hand, also you cannot activate cards, or the effects of cards, with that name for the rest of this turn. This is a Quick Effect if all monsters you control are Winged Beast monsters. 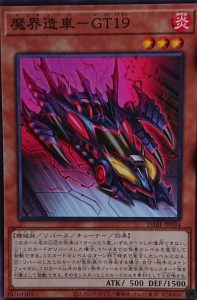 DABL-JP034 魔界造車-GT19 Death-Tune – GT19 (Doom-Tune – GT19)
Level 3 FIRE Machine Flip Tuner Effect Monster
ATK 500
DEF 1500
You can only use 1 of the 1st and 2nd effect of this card’s name per turn, and only once that turn.
(1) FLIP: You can declare a Level from 1 to 9; this card becomes the declared Level until the end of this turn.
(2) During the Main Phase, if this card was flipped face-up (Quick Effect): You can target 1 other face-up monster on the field; immediately after this effect resolves, Synchro Summon using only that monster and this card. 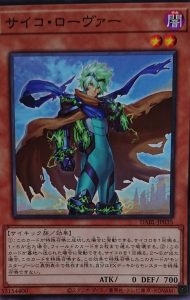 Note: This is a pun on “dice” (saikoro), like many of the cards with a die-roll effect. 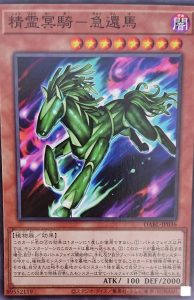 Note: This is a reference to Bon, the Buddhist festivity where one’s ancestors temporarily return from the underworld. A horse-shaped figure made out of cucumbers (or a cow figure made out of eggplant) is offered as a vessel for the spirits. There’s also a pun on its name, “Sudden Return Horse” being written with Kanji in such a way as to sound like “cucumber”. 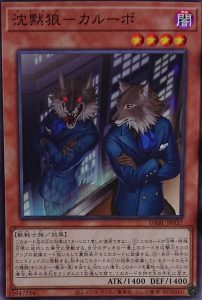 DABL-JP037 沈黙狼-カルーポ Omerta – Calupoh
Level 4 DARK Beast-Warrior Effect Monster
ATK 1400
DEF 1400
You can only use the 2nd effect of this card’s name once per turn.
(1) If this card is Normal or Special Summoned: Equip the top card of your Deck to this card as a face-down Equip Spell that gives it 500 ATK.
(2) During each End Phase: Your opponent calls the original type of card (Monster/Spell/Trap) equipped by this card’s 1st effect, and if they call it correctly, send this card to the GY. Otherwise, discard 1 random card from their hand, and if you do, return this card to the hand.

Note: Omertà is a code of silence related to the mafia. This part is written in Kanji as “silent wolf”. Calupoh is Capo, a rank in the Italian mafia meaning “Captain”, while also Lupo, the Italian for Wolf. 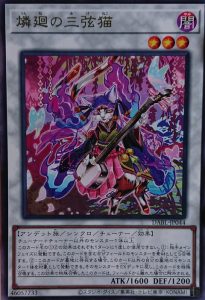 DABL-JP044 燐廻の三弦猫 Rinne no Mikeneko (Reincarnating Shamisen Calico)
Level 3 DARK Zombie Synchro Tuner Effect Monster
ATK 1600
DEF 1200
Materials: 1 Tuner + 1+ non-Tuner monsters
You can only use the 1st and 2nd effect of this card’s name each once per turn.
(1) During your opponent’s Main Phase, you can (Quick Effect): Immediately after this efffect resolves, Synchro Summon using materials you control, including this card.
(2) If this card is in your GY: You can target 1 other Synchro Monster in your GY; return it to the Extra Deck, and if you do, Special Summon this card, but banish it when it leaves the field.

Note: This is a pun on the shamisen, a three-string instrument, and a calico cat, which is a cat with three colors. The name is written as “three-string cat”. 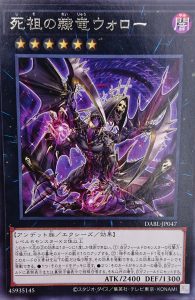 DABL-JP047 死祖の隷竜ウォロー Shiso no Reiryuu Volo (Volo, the Death-Originator Vassal Dragon / Volo, the Doom-Originator Vassal Dragon)
Rank 6 DARK Zombie Xyz Effect Monster
ATK 2400
DEF 1300
Materials: 2+ Level 6 monsters
You can only use the 2nd effect of this card’s name once per turn.
(1) Monsters you control gain 100 ATK/DEF for each card in your opponent’s GY.
(2) (Quick Effect): You can target 1 card in your opponent’s GY, then detach 1 or 2 materials from this card to activate this effect based on the number detached;
● 1: Shuffle it into the Deck.
● 2: If it is a monster, Special Summon it to your field in face-up Attack Position, face-up Defense Position, or face-down Defense Position. Otherwise, Set it to your field. 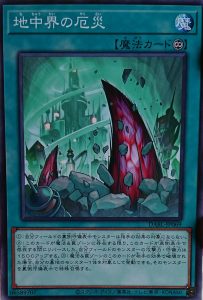 DABL-JP069 地中界の厄災 Chichuukai no Yakusai (Calamity Upon the Mediterranean World / Calamity Upon the Hidden City)
Continuous Spell Card
(1) Your opponent cannot target face-down Defense Position monsters you control with card effects.
(2) Monsters you control that were flipped face-up while this card was face-up on the field gain 1500 ATK/DEF.
(3) If this card in your Spell & Trap Zone is destroyed by an opponent’s card effect: You can target 1 monster in your GY; Special Summon it in face-down Defense Position. 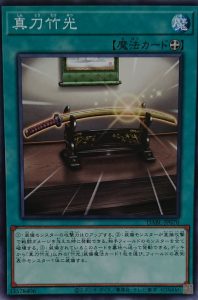 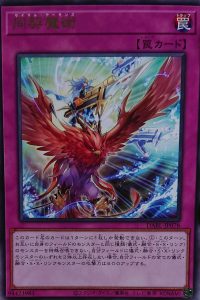 DABL-JP078 同契魔術(サイマル・デーモンズ) Simul Daemons (Simult Archfiends)
Normal Trap Card
You can only activate 1 card with this card’s name per turn.
(1) Neither player can Special Summon monsters of the same type (Ritual/Fusion/Synchro/Xyz/Link) as a monster they control for the rest of this turn, also, if you do not control more than 1 each of Ritual, Fusion, Synchro, Xyz, and/or Link Monsters, all Ritual, Fusion, Synchro, Xyz, and Link Monsters you currently control gain 500 ATK.

Note: Outside of the forced reading, this card’s Kanji name is something like “same/simultaneous contract magic” 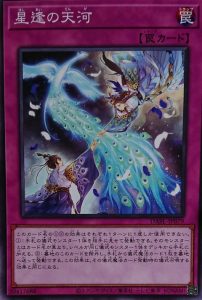 DABL-JP079 星逢の天河 Hoshiai no Tenga (Star-Crossed Meeting)
Trap Normal
You can only use this card name’s (1) or (2) effect per turn each.
(1) Reveal 1 Ritual Monster from your hand; add 1 Ritual Monster with the same Level but a different name from your Deck to your hand.
(2) You can banish this card from your GY, then send 1 Ritual Spell from your hand to the GY; this effect becomes that card’s effect that Ritual Summons a monster when the card is activated. 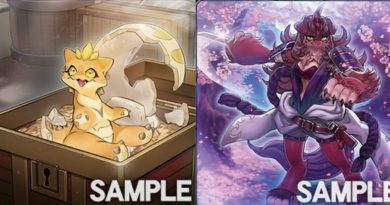 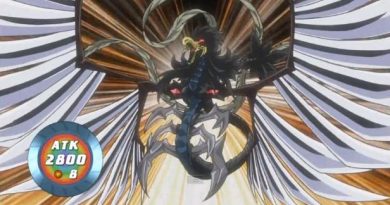 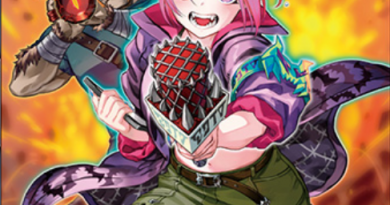 [DABL] News Reporter from the Underworld