The rumored final World Premiere for Code of the Duelist is revealed. 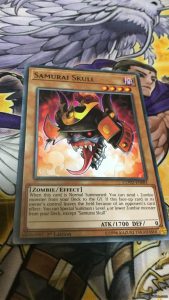 COTD-EN081 Samurai Skull
Level 4 DARK Zombie Effect Monster
ATK 1700
DEF 0
When this card is Normal Summoned: You can send 1 Zombie monster from your Deck to the Graveyard. If this face-up card in its owner’s control leaves the field because of an opponent’s card effect: You can Special Summon 1 Level 4 or lower Zombie-Type monster from your Deck, except “Samurai Skull”.