“COLLECTORS PACK Duelist of Flash” (on sale May 14th, 2016) contains many cards used by “Kaito (Kite)”! Of course it includes shocking new cards of his that appear in the “Yu-Gi-Oh! ARC-V” anime, but it also reprints strong cards he used in the “Yu-Gi-Oh! ZEXAL” anime! And on top of it, there’s a card used by “Mizael (Mizar)”, who appeared in “Yu-Gi-Oh! ZEXAL”, allowing you to collect a number of related “Galaxy” cards!

We’re introducing the 2 “Cipher” monsters used by “Kaito”, along with a new “Galaxy” monster!

An Xyz Monsters Appears That Has Both “Galaxy-Eyes” And “Cipher” In Its Name!! 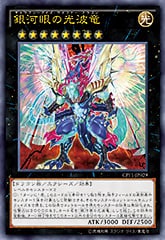 Cipher Wing
[ATK 1400/DEF 1200]
If you control a “Cipher” monster or “Kinetic Soldier”, you can Special Summon this card (from your hand). You can Tribute this card; increase the Levels of all “Cipher” monsters and “Kinetic Soldier” you currently control by 4 until the end of this turn.
[⇒ Its first effect lets you bring it out not just if you have “Cipher Wing”, but also if you have “Galaxy-Eyes Cipher Dragon”! In a deck centered around LIGHT monsters, you can gather 3 copies together using “Photon Veil”, meaning you can easily assemble 3 copies of this card on the field! Of course you can Xyz Summon a Rank 4, but its 2nd Effect that lets you set up for a Rank 8 Xyz Summon is strong! Use it to set up for the Xyz Summon of “Galaxy-Eyes Cipher Dragon”, just like in the anime, and launch an attack! ]

Galaxy Stealth Dragon
[ATK 2000/DEF 1600]
2 Level 4 Dragon-Type monsters
Once per turn: You can detach 1 Xyz Material from this card; Special Summon 1 Dragon-Type monster from your hand. Other “Galaxy” cards you control cannot be targeted, or destroyed by, your opponent’s card effects.
[⇒ Its first effect can even Special Summon high Level Dragon-Types! Since its second effect protects “Galaxy” Cards, it doesn’t just protect Monsters, but it also protects Spell Cards like “Galaxy Zero” and “Galaxy Wave” from effects!]

Powerful “Galaxy” Cards Have Been Reprinted!

Here, we’ll introduce the 4 “Galaxy” cards being reprinted in”COLLECTORS PACK Duelist of Flash”! Though it’s centered around Rank 8 Xyz Summons, you can also aim for Rank 4 or Rank 5 Xyz Summons for powerful combos and attacks!

Galaxy Wizard
[ATK 0/DEF 1800]
Once per turn: You can increase this card’s Level by 4 until the End Phase. You can Tribute this card; add 1 “Galaxy” card from your Deck to your hand, except “Galaxy Wizard”.
[⇒ Its first effect not only supports Rank 8 Xyuz Summons, but it also supports activating “Galaxy Expedition” (described below)! Also, the second effect allows you to add key cards for combos to your hand, allowing you to prepare for strong moves! The card you add to your hand doesn’t just have to be a monster, it can also be cards like “Galaxy Cyclone” which can destroy set cards (which is pretty strong)!! It’s also worth grabbing “Galaxy Expedition” or “Galaxy Zero”!! ]

Galaxy Knight
[ATK 2800/DEF 2600]
If you control a “Photon” or “Galaxy” monster, you can Normal Summon this card without Tributing. When you do: Target 1 “Galaxy-Eyes Photon Dragon” in your Graveyard (if possible); regardless, this card loses 1000 ATK, and if it does, Special Summon that target (if any) in face-up Defense Position. This ATK decrease lasts until the End Phase.
[⇒ By combining it with “Photon” or “Galaxy” monsters that can Special Summon themselves, you can Normal Summon it without a Tribute! So send “Galaxy-Eyes Photon Dragon” to the Graveyard to make use of this effect! Aim for a Rank 8 Xyz Summon, but you can also make use of the high ATK of “Galaxy Knight” and “Galaxy-Eyes Photon Dragon” without going into an Xyz Summon depending on the situtation! ]

What kind of cards will you mix together in your Deck?
Consider what cards you think work well together!
… … Search the Card Database based on the details, and discover new possibilities!!

▼ Go Duel Against The Deck At The Experience Event Before The Cards Go On Sale!

COLLECTORS PACK Duelist of Flash
[On Sale May 14th, 2016]
The latest Collector’s Pack centered around cards from the Anime and Manga has appeared! Of course there’s cards from “Yu-Gi-Oh! ARC-V”, but there’s also powerful cards from past “Yu-Gi-Oh!” Anime and Manga included that are finally being turned into Official Card Game cards! And among them, there’s new “Number” cards and powerful reprinted cards as well!
[ To The Product Page ]